From Wild Wings to Ruling the World 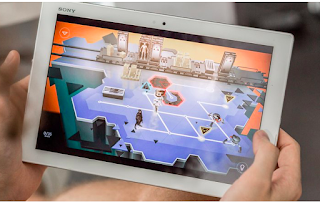 The little guy couldn't have been much more than 4-years old and he was tearing up the game on the tablet in his hands. He was totally oblivious to the chaos around him.

His dad had brought him to Wild Wings on Sunday afternoon for all the pro football games. Fans on all sides were yelling at the tops of their lungs.

Dad was having a beer (just one) and the game king had already had two juice boxes (apple).

As I watched, his fingers flew across the pad and his face immediately reflected wins, losses, shoot downs and being shot down. He was in the zone.

His father looked up from watching the pad over his son's shoulder and our eyes met. Both of us shook our heads, amazed at the kid's prowess.

At 4-years old I was probably still learning to wave bye-bye. Today, saying that young people are growing up with extraordinary techno skills has become, well...ordinary.

Here's the point: No matter what your age, if you are not reaching out to someone younger to learn techno skills, hacks, ideas and predictions you're already falling behind.

Every Tuesday morning at 10 am I meet with an incredibly smart, ambitious and astute 35-year old.  I talk to him about the bigger picture of business and he laughs about the techno-topics I have no idea about.

The one thing we always agree on is that in a couple of decades the 4-year old Pad King and his friends will be ruling the world and we'd better understand the language they are speaking.
Posted by Mike Collins 1 comment:

Thoughts About a Turkey Leg 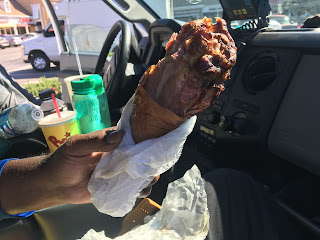 Ran into some guys around lunch on Monday and one had what was left of a  Famous Turkey Leg from the NC State Fair.

We all got a laugh about it and I congratulated him on having ANYTHING left after leaving the fair. I can't even remember everything I ate last Friday.

But, after I drove away I thought about the guy's willingness to use what he had to fill a need. I saw a woman throw away about that much turkey leg as I was walking out the fair gate.

Too often, we overlook resources we have that could move us to the next level or, at the least, help us take a step forward. The resources could be time, energy, money, contacts, stuff, knowledge or...leftovers.

A few years ago I met a couple from Nashville, NC, who wanted to start a small business. They needed $375 to get started, but didn't have the cash. I asked them, "When was the last time you cleaned out your closets, attic and garage?"

They looked at me and their eyes lit up. Two weeks later they had a yard sale that pulled in $758. I remember the number because I loved the example.

We always have something we can use; even it it's only our sweat, our brainpower, or a leftover Famous Turkey Leg from the NC State Fair.