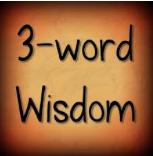 Last night's FB post has gotten a few comments and suggestions of important 3-word phrases such as:
I Love You!
All About Me
Summer Beach Party
One More Beer
Do More Good

This is a great start for the New Year! Check out these sites for 3-Word Wisdom:

The six, giant Scrabble letters on the bookcase by the door of Chapel HIll’s Franklin Hotel bar spell, REFUGE. Just what I need.
Earlier this week I posted a crazy GIF on FB with a fully-dressed guy falling into the surf with a skimboard while his jeans fell down around his knees. I labeled it “My Decade.” It got a lot of laughs and  comments. I’ve continued to watch it because it cracks me up. But, there’s a ton of truth in the image and the message.
The past decade started with a major challenge and they’ve lined up, one after the other. You’ve had times like these, I’m sure. If you’re trying to live a life that matters you’re bound to step in it on a regular basis.
I just dropped some friends off at a party over here and they’ll call when they’re ready to head home. They asked why I wasn’t going to the party—as I’m sure the hostess and host will. I was invited but, tonight, this week, this year, the end of this decade just doesn't seem to be a time for mixing and mingling. I figured this would be a good place to have one glass of wine.
Chapel Hill during the holidays is waaaay different than any other time of year. Kids are gone for Christmas so every restaurant and bar is, well, available. It’ll be in the high-20s tonight so sidewalk traffic is light and, right now, it’s just me and Matt the bartender.
You would think that in a high-class, high-dollar place like The Franklin the bar would look more like a country club’s. You couldn’t be more wrong. The floor is cement, the furniture is what you’d see on a patio and the backlit bar shelves are made of plumbing pipe and 2x6’s; functional, easy to clear and clean. In fact, the only similarity between this place and a country club bar is the clear to dark, dark brown colors of happiness on the shelves.
You know, if I’m in a bar tonight this is probably where I need to be. Football on the silenced, big-screen and upbeat music just loud enough to be perfect. Matt is rockin’ a great Fedora from Goorin Brothers up in PA that made me smile. He’s not chatty as I was 40 years ago, tending bar up Franklin Street at Spanky’s. He’ll speak if spoken to, but he’s not going into 20 questions.
Having worked behind a bar, I often find some of the best life stories come from folks in that position. In fact, a few minutes ago I asked, in my chatty self, “In a thousand words or less, what’s your story?”
Matt thought a second and said, “How about three words…to be continued.”
To be continued.
That’s why I came here tonight. To hear that.


Posted by Mike Collins No comments: 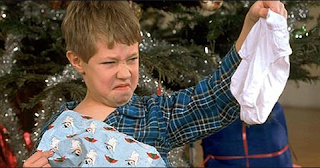 Two weeks from right now there will be a bunch of happy people, a bunch of disappointed people and some sad folks.

The happy people will be with whom they want to be, getting what they hoped and looking ahead to a wonderful day!

The disappointed people will be with folks they wish they weren't, not getting what they hoped for and counting the minutes until Dec 26.

The sad people may be alone or missing someone who was with them in Christmases past; maybe not getting anything; and seeing Christmas as just another day.

I've been some or all three at various times and I've learned a few lessons:
- Christmas is what YOU make it. It's a gamble to rely on others for your holiday cheer.
- It's OK to be your own Santa Claus. In fact, some of the best presents I've ever gotten came from ...Me.
- While all religions don't celebrate Christmas they all have central figures who were giving, caring, loving and all-in when it came to helping others; that is the basic Christmas lesson--and gift.

Finally, exactly one week after Christmas is the New Year which, if you look at it in a positive way, is the best gift of all. You get a new year--and, in this case a new decade--to start over, make some changes if needed and put the past in the...past.

What will you do during the next two weeks to try and have your best Christmas ever or, at least, a Christmas you can enjoy and appreciate.