Even Bad Movies Can Be Good 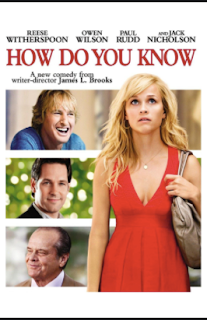 How Do You Know was made in 2010 and, if you check the stars, had a lineup that destined it for--if not greatness--at least, respectability. Instead, the movie cost $60 million to make and brought in $48 million...it lost $12 Million Dollars!

I'm sure we could offer a list of suggestions of what the producers could have spent that $60 million on...yes?

Here's the entire movie in one sentence: Reese Witherspoon is a star member of the US Olympic Softball team who gets cut, gets depressed, and finds love with an unlikely partner (no, not Jack Nicholson). That's it, that's the movie. I'll tell you up front...I didn't make it through the whole thing. It was kinda cute, but not that cute.

However, the wonderful actor, Tony Shalhoub, has a bit part as a psychologist and he offers a line that, as far as I'm concerned is the best thing in the movie. It is one of those lines that should have God prefacing it with, "Now, you should pay attention to this."

Witherspoon's character goes to see Shalhoub the shrink, realizes she doesn't want the counseling, but asks in a roundabout (one of the reasons the movie tanked) way, "Is there a general question or thought or bit of advice that could help anyone in any situation at any time?"

Shalhoub says, simply, "Yeah. You have to figure out what you want and how to ask for it."

"You have to figure out what you want and how to ask for it."

The "what you want" could be THE ONE THING or it could be the primary thing in each of the different areas of life; physical, mental, spiritual, professional, family, community and any other area that is important to you.

The "how to ask" is interesting...it could mean, literally, asking in the verbal sense along with, of course, who you should ask.

But, it could also infer action...if you know what you want and focus on it and do the things you need to do to get it then, quite often, you'll end up with what you want. You've, essentially, asked the universe through your thoughts and actions and the universe has offered up the reward.

(And yes, I know that right now you Negative Nellies are thinking, "Nooooo, sometimes you work your tail off and don't get...blah...blah...blah. I get that...but, if you spent as much time trying as you do whining you'd get a lot more of what you want...trust me.)

"You have to figure out what you want and how to ask for it."

A few months ago I saw a graphic that said, "The pandemic is the world putting everything on hold to give you a chance to get your sh** together."

I'm taking that advice seriously. And, part of me getting my sh** together is trying to figure out what I want for the decade or so have left to be relevant in life.

IF you see value in this, if you know someone it might help...pass it on.